Ex situ programmes have become critical for improving the conservation of many threatened species, as they establish backup populations and provide individuals for reintroduction and reinforcement of wild populations. The Iberian lynx was considered the most threatened felid species in the world in the wake of a dramatic decline during the second half of the 20th century that reduced its numbers to around only 100 individuals. An ex situ conservation programme was established in 2003 with individuals from the two well-differentiated, remnant populations, with great success from a demographic point of view. This study evaluates the genetic status of the Iberian lynx captive population based on molecular data from 36 microsatellites, including patterns of relatedness and representativeness of the two remnant genetic backgrounds among founders, the evolution of diversity and inbreeding over the years, and genetic differentiation among breeding facilities. In general terms, the ex situ population harbours most of the genetic variability found in the two wild populations and has been able to maintain reasonably low levels of inbreeding and high diversity, thus validating the applied management measures and potentially representing a model for other species in need of conservation. The Iberian lynx ex situ breeding programme has been a key piece in the multifaceted conservation of the Iberian lynx. After 12 years, it has accomplished the two main goals that were set at the start. Firstly, it has succeeded in establishing a demographically and genetically healthy ex situ population that may act as a safeguard for the species in case of extinction in the wild. Secondly, after a few years of internal growth, the population has been serving as the almost exclusive source of individuals for reintroduction in the wild. Besides, the programme has assembled a set of experts in many different fields as well as fostered and coordinated research on issues of high relevance for the conservation of the species, while becoming a major driver of awareness and dissemination. The Iberian lynx ex situ programme has been quite effective in representing, boosting and maintaining the low genetic diversity that survived the latest severe bottleneck of the species while minimising the accumulation of inbreeding, which should ultimately result in increased adaptive potential and average fitness. In this regard, the Iberian lynx ex situ programme could serve as an example of marker-assisted pedigree-based management for other species at similar conservation stages. informacion[at]ebd.csic.es: Kleinman-Ruiz et al (2019) Genetic evaluation of the Iberian lynx ex situ conservation programme. Heredity Doi 10.1038/s41437-019-0217-z 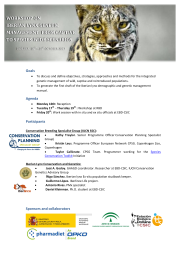 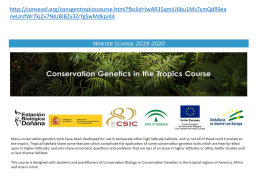