The EU has recently approved its Regulation on the prevention and management of the introduction and spread of invasive alien species, which will come into force in 2015. For successful implementation, the European Commission will need to adopt an EU list of invasive alien species, to be agreed with the Member States. BirdLife Europe, an international organization that promotes conservation science-based, will propose a priority list of species based on the best available evidence of potential impact, and will be achieved through a systematic approach. This task is organized along with the Estación Biológica de Doñana (EBD-CSIC) around two workshops that will be hosted in our premises in Seville on January 21st – 22nd.

Among participants: the universities of Cambridge, Vienna and Berne, the Centre for Environmental Research of Leipzig (UFZ, Germany), the Zoological Society of London, the Academy of Sciences of the Czech Republic, international (EPPO, IUCN) and national organizations (Belgian Biodiversity Platform). 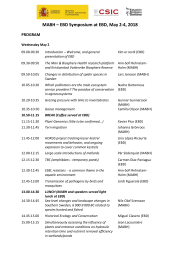